Bittersweet: The Zoo Wishes Farewell Along with a Warm Welcome this Fall 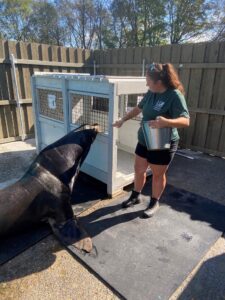 Much like the 2015 “We Don’t Like it Either!” renovation campaign for the White -handed Gibbon pair, the Utica Zoo recognized that the California Sea Lion exhibit did not provide an ideal habitat for Porter and Munchkin. Our male, Porter, weighs approximately 685 pounds, while the smaller female, Munchkin, weighs 240 pounds. The pool, built to 1986 standards at approximately 650 sq. ft., is not optimal for the two animals to freely exercise, nor for the expression of as many natural behaviors as a more complex environment will.

Exhibit concerns were confirmed during the Zoo’s 2018 accreditation process by the Association of Zoos and Aquariums (AZA). The exhibit was not in line with modern zoological practices and did not meet AZA standards. It would have to be modified or decommissioned if the Zoo was to maintain its accreditation. The cost to renovate and maintain the exhibit ($8-10 million in 2018) was not feasible for the Zoo, and the well-being of our sea lions remained paramount. The difficult decision and steps to work within the network of AZA institutions to find Porter and Munchkin new homes began.

The typically long search and transfer process was extended due to the COVID-19 pandemic, though recently the plan to move Porter to his new home developed quickly. Porter will be moving to the Turtle Back Zoo in New Jersey on Monday, September 27. Munchkin will remain at the Zoo until her transfer plans are finalized, which may be a few more weeks. While Porter and Munchkin were both born in the wild, they were both assessed as non-releasable prior to their Utica arrival due to their comfort level with humans on the West Coast.

“We’ve been aware for quite some time that our community shares this bittersweet acknowledgment; we often hear our visitors say we LOVE the California sea lions, but we don’t like their exhibit,” shares Utica Zoo Executive Director Andria Heath. “During the AZA inspection of 2018, it was pointed out that Porter can only swim 2.5 lengths of his body in the pool; that’s when we came to terms that we needed to make this difficult decision.”

According to Utica Zoo Director of Animal Care, Education, and Conservation Jay Pratte, one of the highest standards of animal care is to ensure that the animals are experiencing a positive welfare state.

“One of the key factors in this is maintaining habitats that are spacious and complex enough to allow the animals to express a wide range of species-typical behaviors,” explains Pratte. “Sadly, our pool does not meet these requirements, but the Utica Zoo has some exciting developments to reflect this industry best practice.”

“Directing the zoo’s future can be complex; it involves not only the on-going welfare of living animals and funding the ever growing costs of caring and improving habitats but also the responsibility and opportunity to tell the story and conservation action steps on behalf of Utica Zoo’s animals’  counterparts in the wild.  Add to that keeping the zoo vibrant and interesting for visitors and supporters; it’s a matter of having many priorities at one time,” Heath adds. “It’s certainly rewarding and involves a great deal of local and national collaboration. We have many exciting ideas for the sea lion exhibit area and will explore these opportunities as we seek and secure funding.”

The staff at the Turtle Back and Utica zoos plan to share Porter’s transition and new home with the Mohawk Valley community through social media in the coming weeks.

Change will also come to the Utica Zoo this fall with the expansion of the Hartmann’s Mountain Zebra exhibit and the addition of a female zebra, Zecora, who will be joining the Zoo family at the end of October from Disney’s Animal Kingdom. The Zoo hopes that she will be a mate for Rundu, the resident male zebra, who came to Utica in 2013.

To stay up-to-date on the exciting advancement at the Utica Zoo or to support its progress, visit uticazoo.org.

Due to the weather, the zoo will be closed on 4/19 for the safety of our animals and visitors. we apologize for any inconvenience.